There are several styles of dress shirt that can be appropriate for wearing with a tuxedo. The following is an explanation of the three options we have that accommodate tuxedo studs: Pleated Front, Pique Bib Front and Plain Tuxedo Front. This post also explains how the removable buttons function and has some other style suggestions for Tuxedo shirts. For more information on recommended formal attire, see Proper Cloth’s official Tuxedo Shirt Guide. 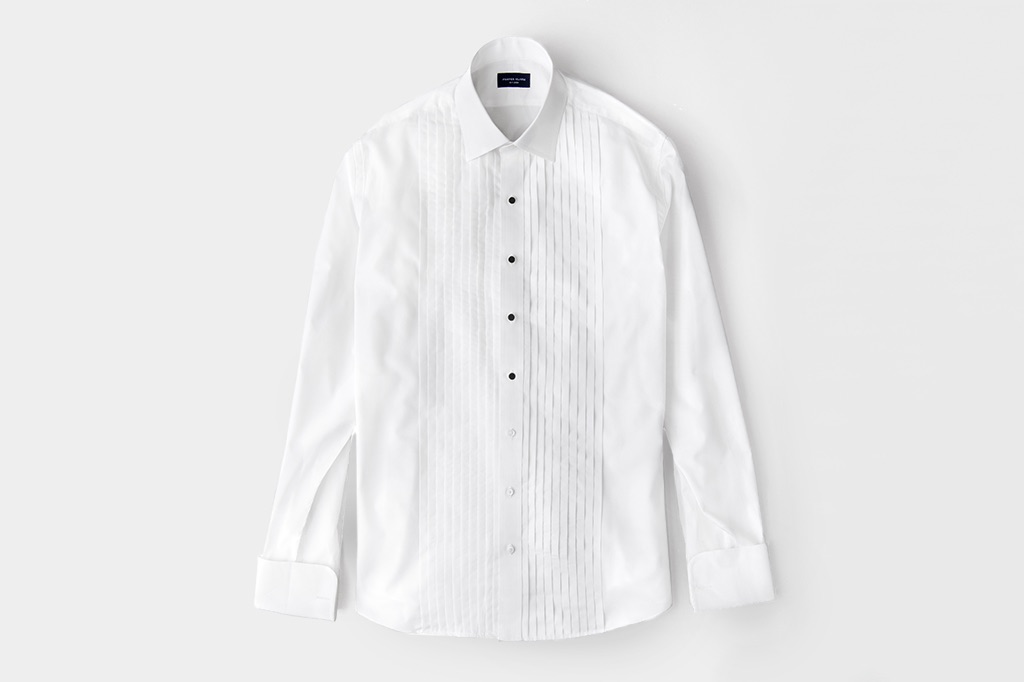 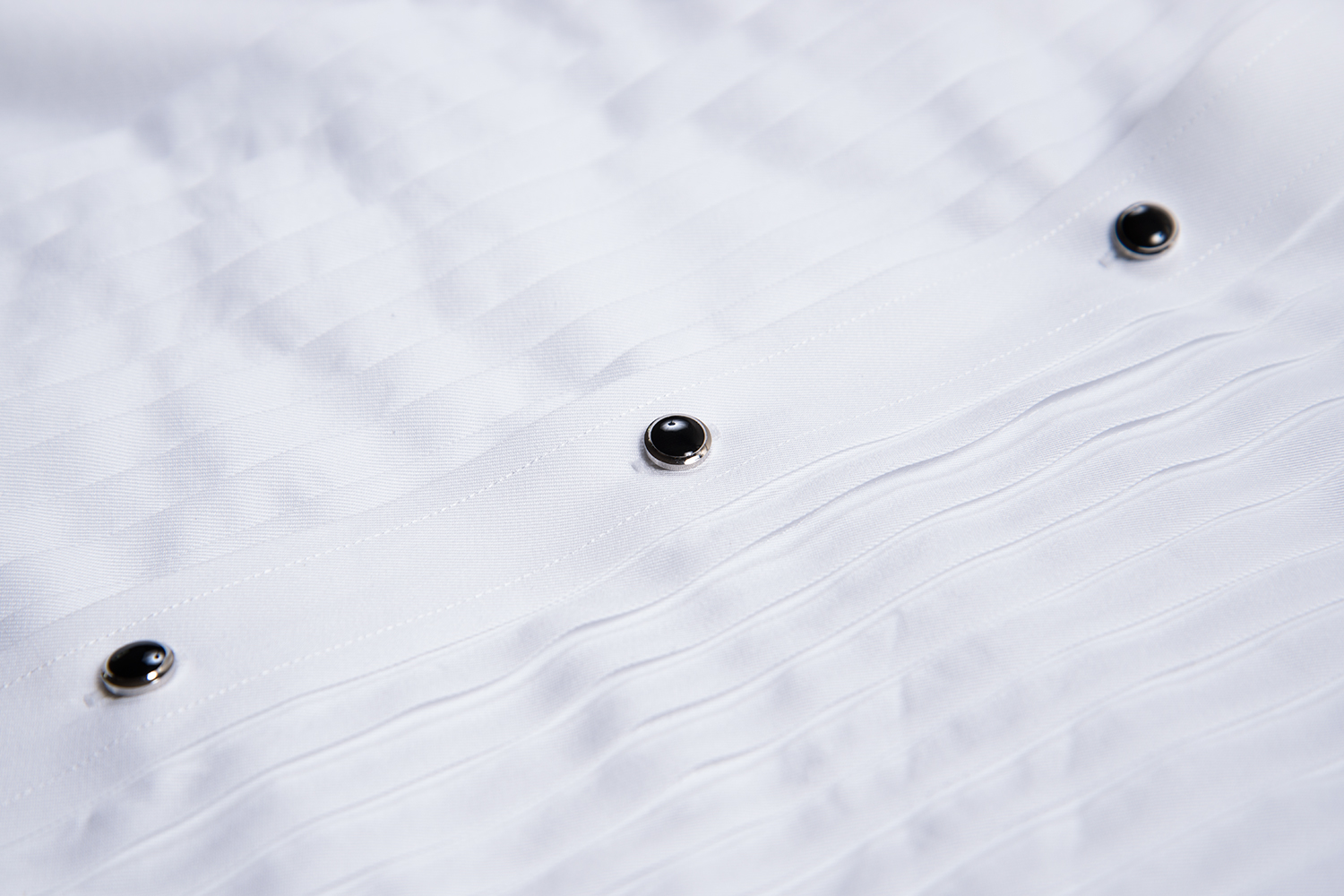 The piqué bib front tuxedo shirt has a special pique fabric sewn on the front.  This is a beautiful fabric from Thomas Mason with the classic piqué texture.  The bib is 10 inches wide and goes just below the 5th button.  There is no placket added to this shirt style, so the front is very clean and simple. 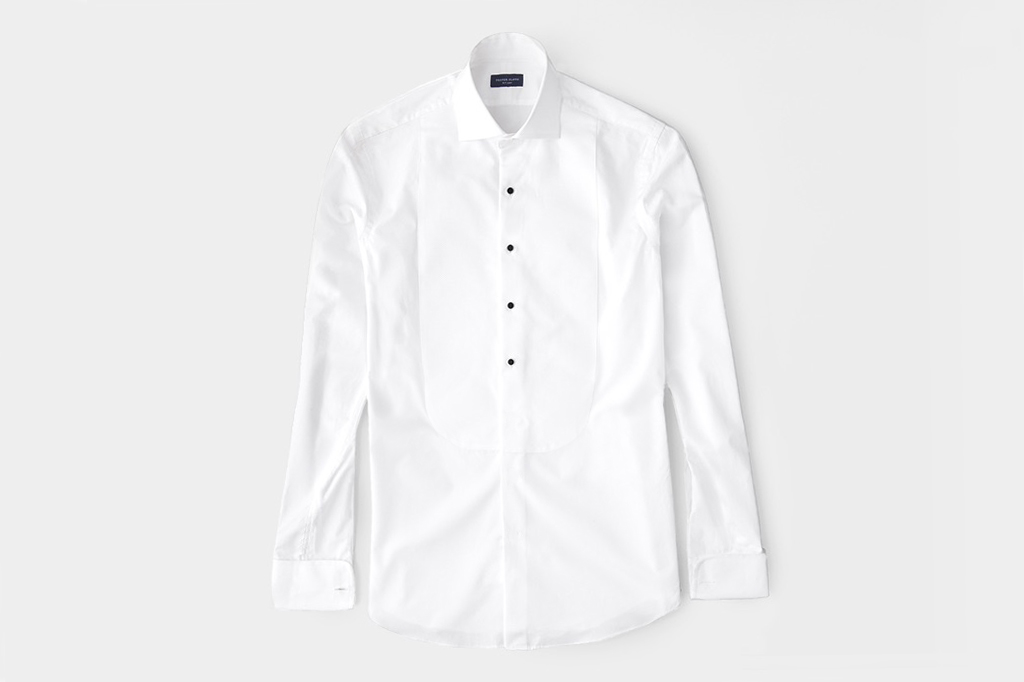 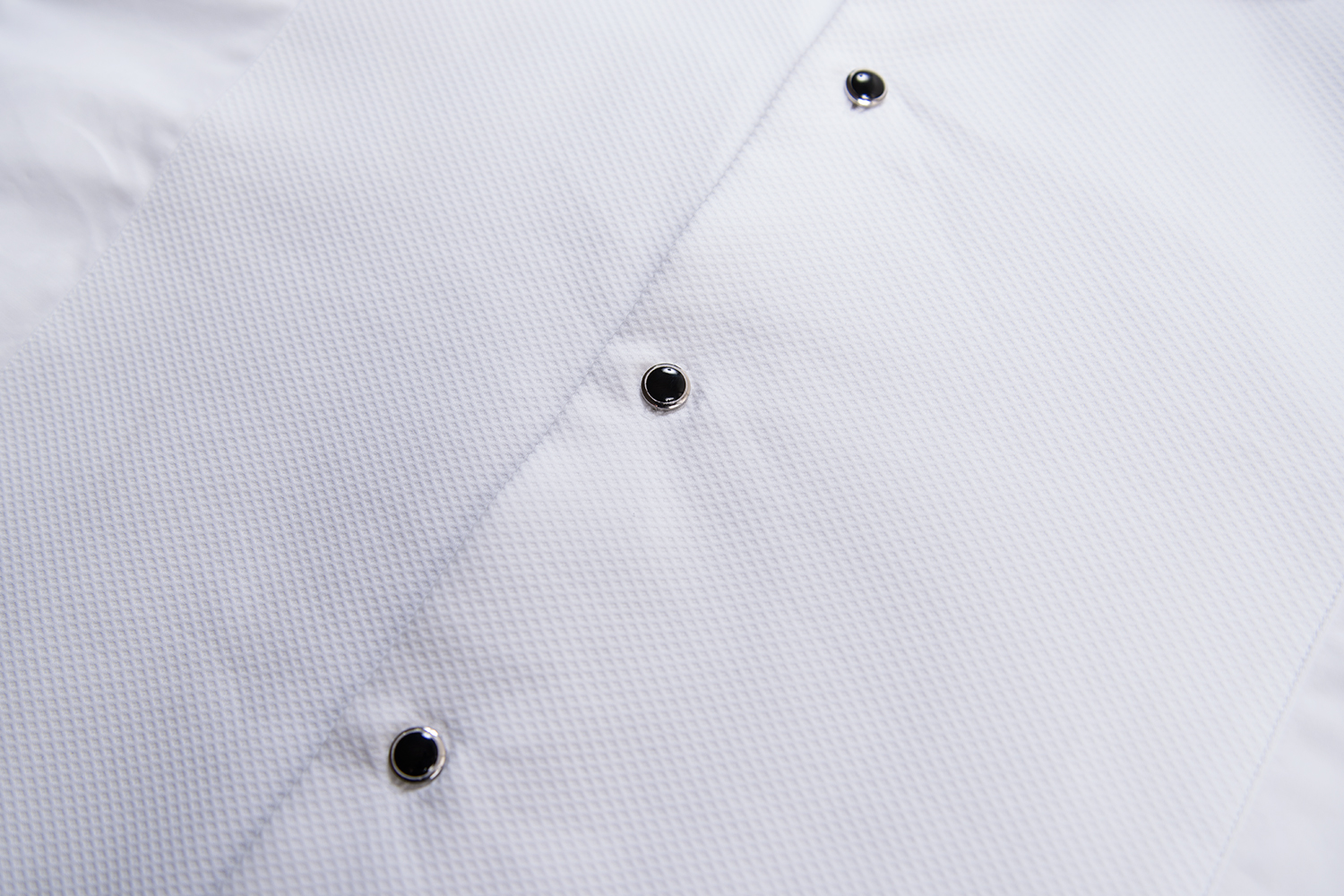 The plain tuxedo shirt front is basically just like a french front, except (like the other tuxedo fronts) the top four buttons are removable so that the shirt can be worn with studs. 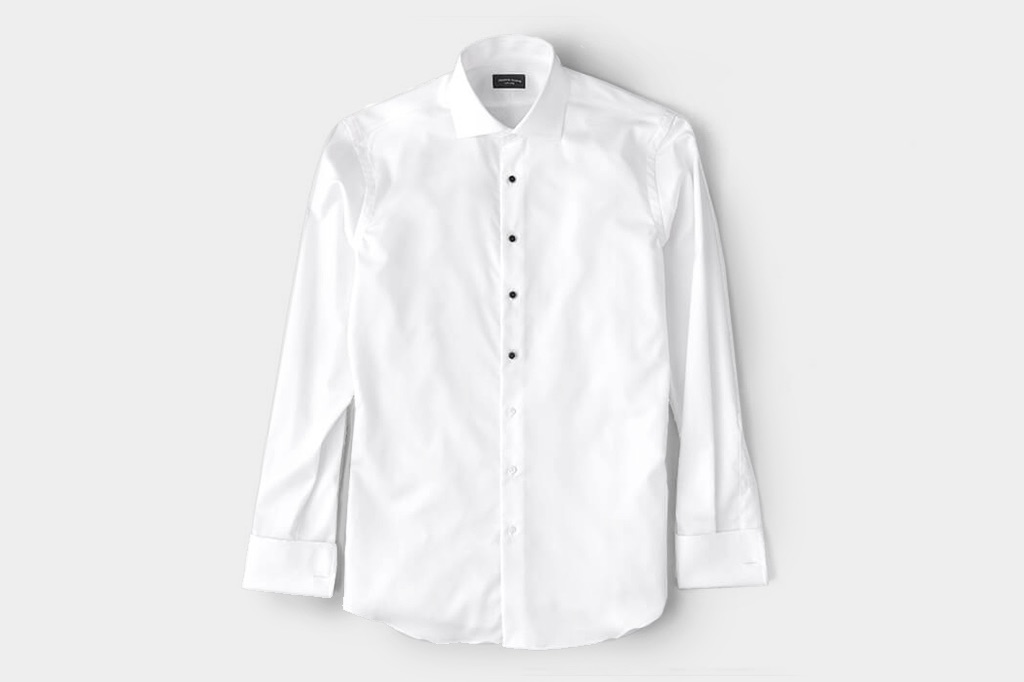 The plain tuxedo front is the most modern, minimalist option and a Proper Cloth favorite.  It’s a particularly clean finish to the shirt front and with tuxedo studs it’s particularly elegant. 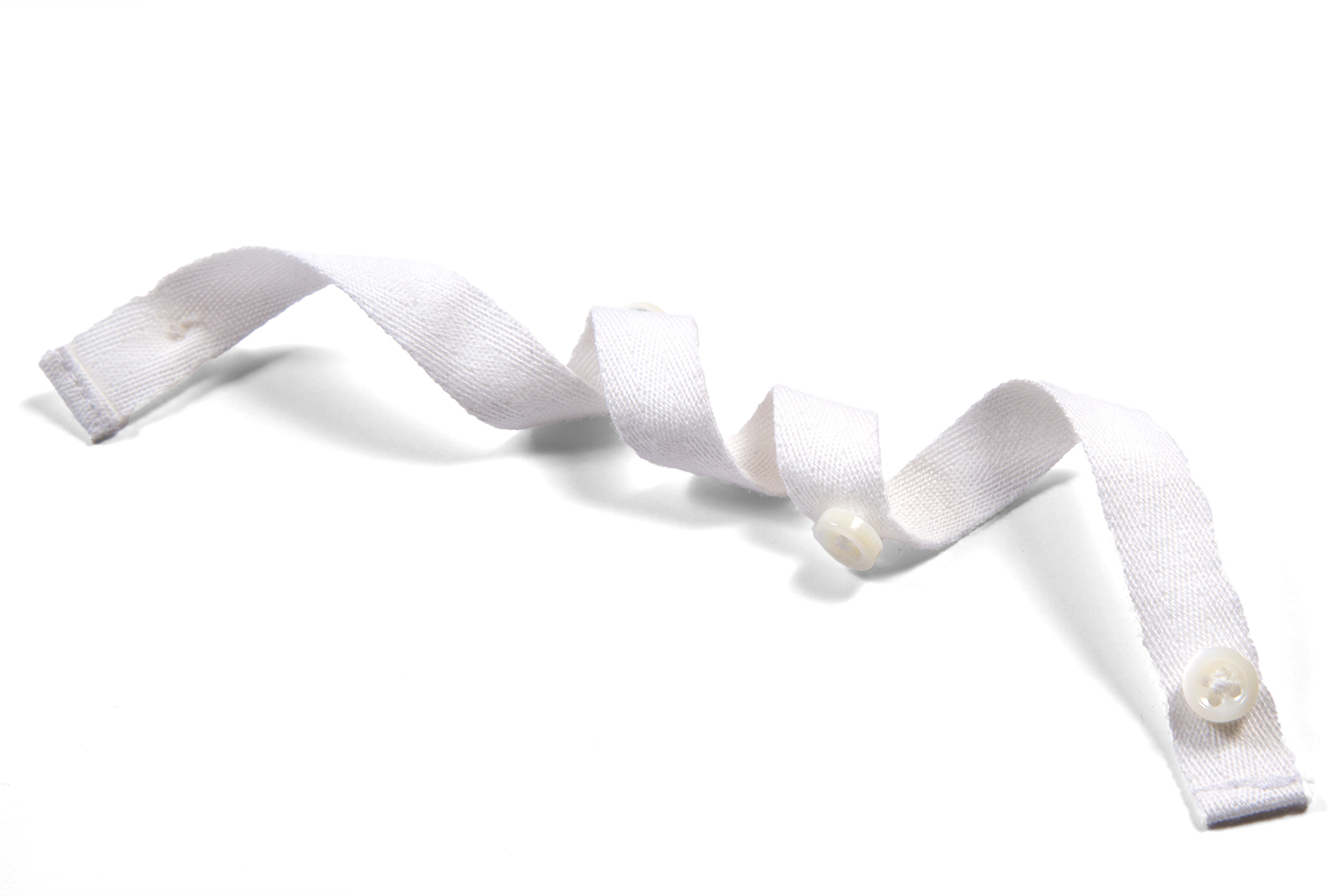 Note that for our tuxedo shirts both the removable buttons and the buttons below them on the shirt front of a tuxedo are smaller (9mm diameter) than the standard buttons (12mm diameter) we use on our shirts.  We do this so that we can keep the button holes smaller for a snugger fit on the tuxedo studs.  We’ve found that some tuxedo studs have smaller diameters and we want to ensure that no matter what size tuxedo studs you use they are not going to accidentally fall out of your shirt.  We also think the smaller buttons on the shirt front make for an elegant formal look.

Also note that the button holes on the back side of the shirt front are aligned horizontally.  This helps keep the shirt front straight and also holds the studs in place. 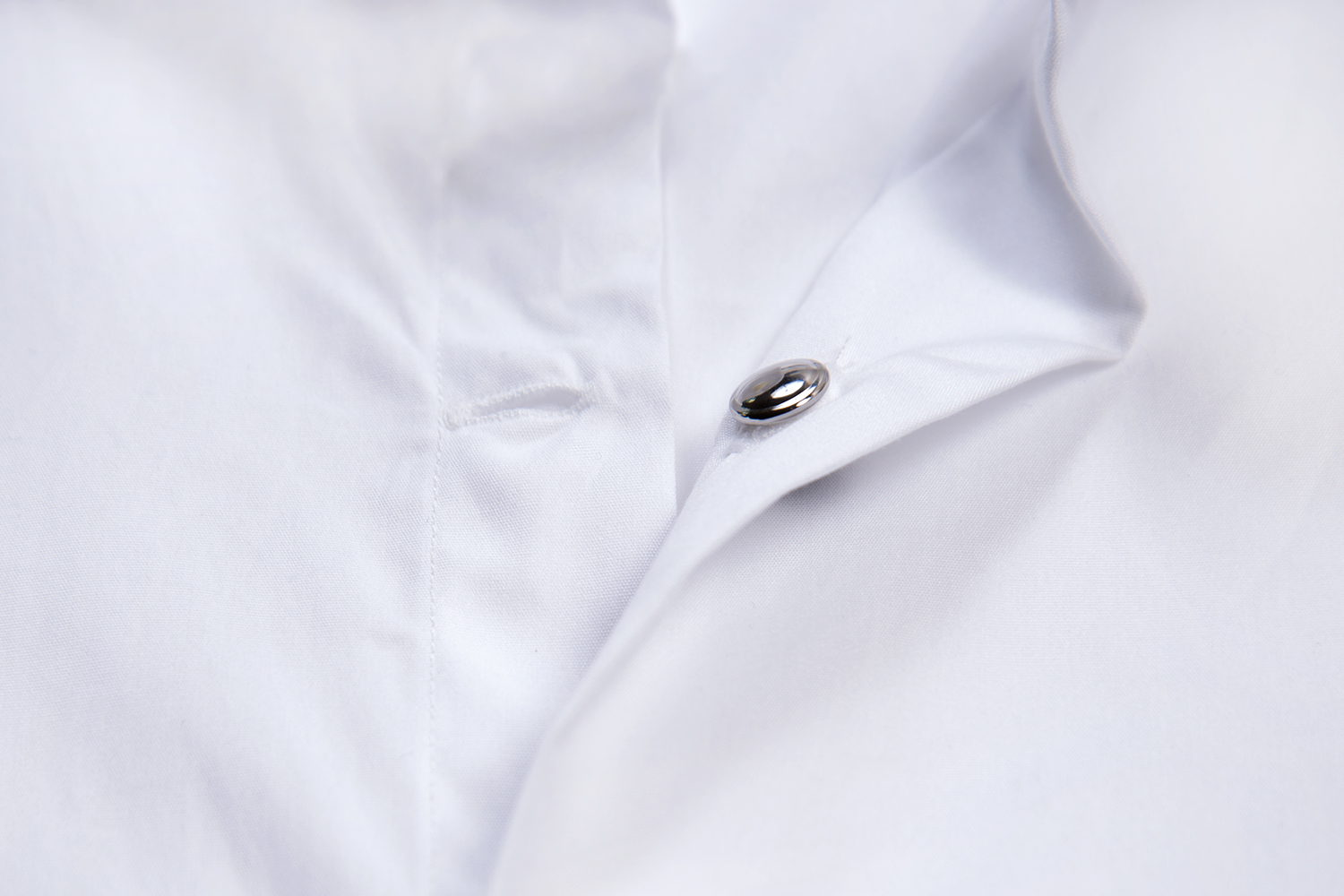 Can the shirt be worn with the removable buttons like a normal dress shirt?

This is possible, but it’s really not recommended.  Note that you will have this extra strip of fabric against your chest which could be uncomfortable.  Also the buttons on the shirt front will be smaller than normal.

Why are only the top four buttons removable?

This is the current standard for tuxedo shirt fronts.  Actually, historically it would only be the top three buttons, but in the last decade or so it’s become more normal for a tuxedo shirt to accommodate four studs.  Some are bothered by the result that this leaves at least one, if not two normal buttons showing above the belt, but keep in mind this is totally normal. Traditionally you might cover up those buttons with a cummerbund.  More generally, when the jacket is buttoned up it will cover them regardless.

What other shirt front options can be appropriate for wearing with a tuxedo?

These days, it’s not totally out of the question to simply wear a really nice white shirt with a tuxedo.  In this case we suggest selecting the French Front style and opting for nice mother of pearl buttons to give the shirt a bit more luxurious touch.  Another option is to choose the fly front style so that the buttons will be covered completely.

Which collar do you recommend for a tuxedo shirt?

If you plan to wear the shirt with a bow-tie, we generally recommend the classic English Spread collar or slightly taller President Spread collar.  Both are spread wide enough that the collar points do not stick out too far below the bow-tie, yet not so cutaway that the bow-tie does not have support on the sides to keep it straight. Other fun collars to consider would be the super-traditional Wingtip collar.  You could also have some fun with the smaller Franklin Spread collar.

What cuff style do you recommend for a tuxedo shirt?

For a formal shirt like this we strongly suggest one of the French Cuff styles. It’s not the end of the world to use barrel cuffs, but if there ever was a time where cufflinks are appropriate it would be with a tuxedo.

What fabric do you recommend for a tuxedo shirt?

Any nice white fabric will work fine. We generally recommend a luxurious white twill due to its subtle shine and opaque appearance–a perfect combination for a formal shirt that photographs well. However, some folks prefer a crisp, lighter-weight broadcloth especially when pairing with a pleated front or bib front design.